The Radio as an Apparatus of Communication by Bertolt Brecht 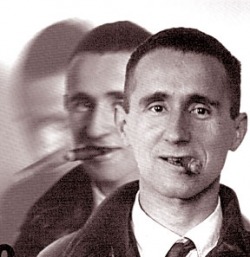 In our society one can invent and perfect discoveries that still have to conquer their market and justify their existence; in other words discoveries that have not been called for. Thus there was a moment when technology was advanced enough to produce the radio and society was not yet advanced enough to accept it. The radio was then in its first phase of being a substitute: a substitute for theatre, opera, concerts, lectures, cafe music, local newspapers and so forth. This was the patient's period of halcyon youth. I am not sure if it is finished yet, but if so then this stripling who needed no certificate of competence to be born will have to start looking retrospectively for an object in life. Just as a man will begin asking at a certain age, when his first innocence has been lost, what he is supposed to be doing in the world.

As for the radio's object, I don't think it can consist simply in prettifying public life. Nor is radio in my view an adequate means of bringing back cosiness to the home and making family life bearable again. But quite apart from the dubiousness of its functions, radio is one-sided when it should be ttwo It is purely an apparatus for distribution, for mere sharing out. So here is a positive suggestion: change this apparatus over from distribution to communication. The radio would be the finest possible communication apparatus in public life, a vast network of pipes. That is to say, it would be if it knew how to receive as well as to transmit, how to let the listener speak as well as hear, how to bring him into a relationship instead of isolating him. On this principle the radio should step out of the supply business and organize its listeners as suppliers. Any attempt by the radio to give a truly public character to public occasions is a step in the right direction.

Whatever the radio sets out to do it must strive to combat that lack of consequences which makes such asses of almost all our public institutions. We have a literature without consequences, which not only itself sets out to lead nowhere, but does all it can to neutralize its readers by depicting each object and situation stripped of the consequences to which they lead. We have educational establishments without consequences, working frantically to hand on an education that leads nowhere and has come from nothing.

The slightest advance in this direction is bound to succeed far more spectacularly than any performance of a culinary kind. As for the technique that needs to be developed for all such operations, it must follow the prime objective of turning the audience not only into pupils but into teachers. It is the radio's formal task to give these educational operations an interesting turn, i.e. to ensure that these interests interest people. Such an attempt by the radio to put its instruction into an artistic form would link up with the efforts of modern artists to give art an instructive character. As an example or model of the exercises possible along these lines let me repeat the explanation of Der Flug der Lindberghs that I gave at the Baden-Baden music festival of 1929.

[Brecht repeats here the second, third and fifth paragraphs of "An Example of Pedagogics"]

'In obedience to the principle that the State shall be rich and man shall be poor, that the State shall be obliged to have many possibilities and man shall be allowed to have few possibilities, where music is concerned the State shall furnish whatever needs special apparatus and special abilities; the individual, however, shall furnish an exercise. Free-roaming feelings aroused by music, special thoughts such as may be entertained when listening to music, physical exhaustion such as easily arises just from listening to music, are all distractions from music. To avoid these distractions the individual shares in the music, thus obeying the principle that doing is better than feeling, by following the music with his eyes as printed, and contributing the parts and places reserved for him by singing them for himself or in conjunction with others (school class).'

Der Flug der Lindberghs is not intended to be of use to the present-day radio but to alter it. The increasing concentration of mechanical means and the increasingly specialized training--tendencies that should be accelerated--call for a kind of resistance by the listener, and for his mobilization and redrafting as a producer.

This exercise is an aid to discipline, which is the basis of freedom. The individual will reach spontaneously for a means to pleasure, but not for an object of instruction that offers him neither profit nor social advantages. Such exercises only serve the individual in so far as they serve the State,a nd they only serve a State that wishes to serve all men equally. Thus Der Flug der Lindberghs has no aesthetic and no revolutionary value independently of its application, and only the State can organize this. Its proper application, however, makes it so 'revolutionary' that the present-day State has no interest in sponsoring such exercises.

This is an innovation, a suggestion that seems utopian and that I myself admit to be utopian. When I say that the radio or the theatre "could" do so-and-so I am aware that these vast institutions cannot do all they 'could', and not even all they want.

But it is not at all our job to renovate ideological institutions on the basis of the existing social order by means of innovations. Instead our innovations must force them to surrender that basis. So: For innovations, against renovation!