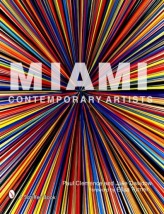 Book cover from Miami Contemporary Artists, an effort by Julie Davidow and Paul Clemence with essays by Elisa Turner, an award winning journalist and art critic for The Miami Herald, Miami correspondent for Art News. Ms Turner, provides an incisive picture of the evolution of the art scene from 1980's to the present that delineates the trajectory of the scenes and enables the reader to formulate a context for the ensuing portraits.

With more than 315 color photos, this exciting new book takes reader through significant highlights of the city's art history and showcases  over a 100 contemporary artists who have helped bring the cultural evolution to fruitition. Ranging from established artist with international careers to those beginnig to make a name for themselves, this selection reveals diversity that breathes creative energy into the sultry, scintillating city of Miami

In conjuction with the launching of the book Miami Contemporary, Gean Moreno, curated Creating a Scene, an "exhibition that strives to produce a collective portrait of the Miami art scene from the vantage point of the cultural producers rather than its consumers. Inviting four alternative spaces and over forty artists, it seeks to open a space of self-representation for those engaged with cultural production at the ground level. Rather than present discreet objects, the exhibition will function as a space in which stories will be created that better explain the contexts against which art produced in Miami should be placed and understood".